Ever since the first time I’ve been to Chipotle, I’ve been determined to visit back at least one more time. And I did. I went for interviews and finally, I was hired!. Now, I’ve been working at Chipotle since mid-April,... END_OF_DOCUMENT_TOKEN_TO_BE_REPLACED

What is “Life In Pictures”? Take as many pictures as you want throughout the week or day to recount the things you did avoiding as much text as possible. Your job is to guess what happened! For more info, click... END_OF_DOCUMENT_TOKEN_TO_BE_REPLACED

If you've followed me from Tumblr, you'll know that after my first experience at Chipotle, I've applied to work there! I am waiting eagerly to hear back from my second interview at Chipotle’s! One if the team managers said they liked me because the minutes I walked into the first interview he saw me dancing to the radio song, shake it off, and he said he pointed at me to one of the other members and said, “she’s getting hired, she’s fun.” And he told me this and my heart just JUMPED... END_OF_DOCUMENT_TOKEN_TO_BE_REPLACED 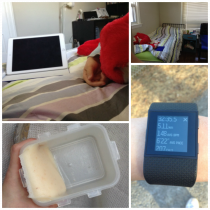 He yells at me so loud that the person renting our family room could no doubt, hear, and twice he raised his hand to slap me and take I flinch. He was furious—and for what? Two plates? I’ve had friends who leave their dishes for the entire week and never have to wash anything for themselves! I’d open my mouth to say something but I knew all my attempts would be redundant and would just drive them even further into hysterious rage. I’ve reported my dad twice to Children's aid society, so I think he dare touches me physically because he’s been warned; but a part of me wanted him, dared him to beat the fuck out of me, just so I could call the police and have shit go down with him. I wish I could explain everything I am feeling and how badly my relationship to my family is, but i have no words to explain, and if you asked, only a sigh would escape my lips. On a positive side, i worked nearly 8 hours, the longest shift I’ve had since my first day(new years eve; 11 hours) and it was busy, which meant there was a lot of fun things to do. When my boss was out, I snuck two slices of bacon in the microwave and ate it. I’m terrible :P but I consider it “living like a teenager” for once. I’ve never been free and impulsive and immature and always the good girl, never living life and laughing and doing mischief, it actually felt kind of good. :) END_OF_DOCUMENT_TOKEN_TO_BE_REPLACED

Two restaurants in one week. That never happens! I mentioned in my last post that I was going to take an entire rest week. Well, I took a rest week and then some, and I thought my eating was going... END_OF_DOCUMENT_TOKEN_TO_BE_REPLACED