Eggs. Why do I like them? They are the only finger food I know that is low carb and has fats. Sometimes I scoop out the yolk and save the whites for another day I need the protein. There’s a boy at school who brings me hard boiled eggs because he knows I need emergency healthy snack for rehearsals after school.

After posting that on Tumblr, I received an ask:

His name is Daniel and he’s in my grade and he’s uber chill! I jokingly texted him a week ago asking him if he had any hard boiled eggs to bring for me(they were the only keto-paleo friendly hand food i could think of that normal people have) because I had rehearsals that day after school, and I thought I might’ve not packed enough fats to last me through that long day and surprisingly, he brought them to me! He brought TWO! Apparently his fam cooks about 7 each morning and he doesn’t always eat his, and neither does his brother, so today he brought 3 for me because he knows I like them and last week I asked him but this week I said nothing!

And yeah i guess he’s cute. He takes fitness and runs and is really chill, but I think of him as a friend/brother and can’t see us going any further than that, but I’m so happy he thought of me this morning and brought me hard boiled eggs. We sit at lunch together everyday, even if our crew of friends aren’t there, he comes in and sits with me at lunch. I used to sit alone.

I guess its the fact that anyone would ever think of me that touches my heart, you know? I always think of others and wonder if anyone out there thinks of me at all. It goes back to that quote I posted last week; “All I wanted, was to be wanted”.

Anyway, me and Daniel are pretty close. I went over to his house twice, the second time being yesterday where I indulged in a lot of dairy. I decided to let myself loose on diet just for the month of December since it is a time to stress less, after all, and kick things up again in January. I’m usually preservative, dairy, and nut free, but just for the next few days or so I’ll be making lots of different foods. I still try to avoid gluten and high fructose corn syrup for sure, as those are simply notorious on the body! Yesterday I ate about half of an entire large, rectangular cheese bar and Daniel didn’t judge me for melting the cheddar in the microwave and eating it off the plate like that. All gooey, that’s my guilty pleasure.

I topped it with low fat sour cream(he didn’t have regular full fat and I didn’t mind since I could use the less calories anyway). You should have seen me. #Beast ModeInTheKitch

Oh, I should have taken a picture! It’s hard to imagine that I once despised cheese. It’s true; when I when arrived in Canada all milk products tasted foul to me. I was like, “what is this?!” I wanted to throw up. It’s funny now, because giving up cheese is like sentencing myself to life imprisonment. Okay, not actually, because BACON but you understand what I mean.

On the last day of the show I hung out at Daniel’s again and I got there before him, so  I started to rumage the fridge and ate some cheese and chicken h is father offered. I found a full package of chocolate chip cookies on the way there lying on the ground, unopened, and so I thought I might as well bring it. We started watching The Wind Rises from Hayao Mimizaki, but we couldn’t get into it! Maybe it was because we were talking throughout the movie, but I usually love his movies, like Spirited Away and Howl’s moving Castle, and all. This was the first movie I did not enjoy and we got through less than a third of the way through I and knew I had to call it quits. I might give watching that movie another go. That night, his brother cooked some nice pork chops and they had the juiciest outter layer of fat and I devoured a slice…with some more melted cheddar… and proceeded to sneakily steal some other the fatty layers of the leftovers… 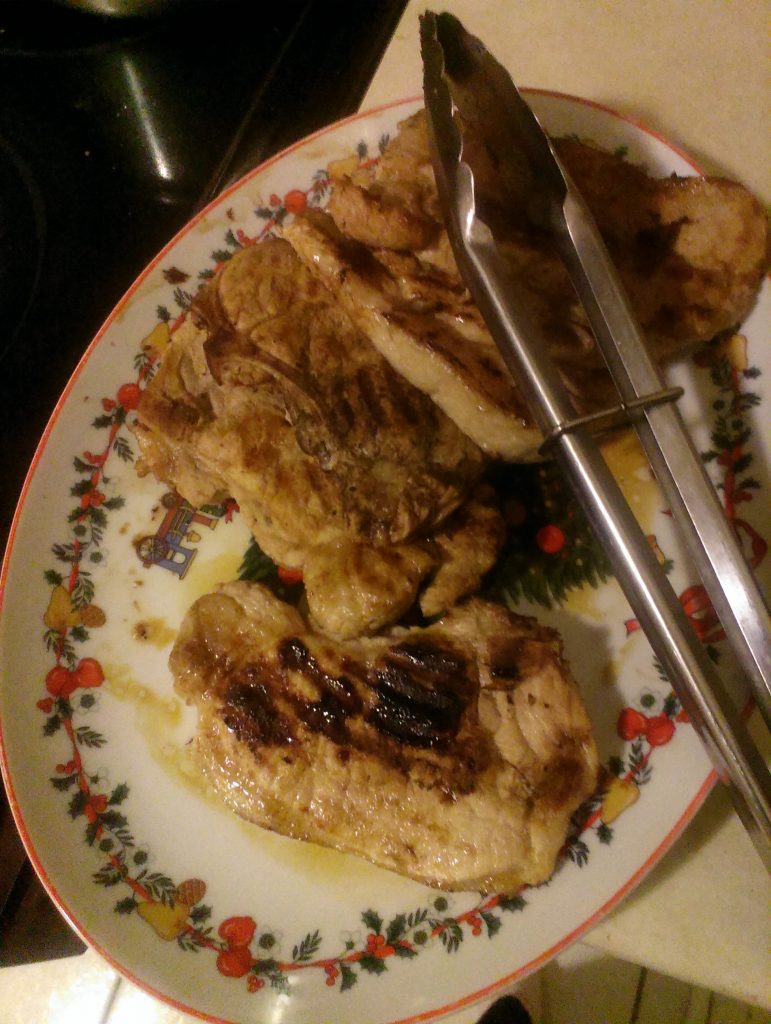 How about I’ll take all the fat and you can have the meat?

a linkup with Becky, Jenn, Amanda, Jill, Erin, and Heather.

Guilty Pleasures? What’s one food you grew to like? What did you think of “The Wind Rises”, if you watched it? How do you like pork chops? Can I take your fatty layer? Do you have a coworker that brings you food? 🙂