Yeah, I know, right? I was so excited when I found out, even if it was anonymously, I had a taste of fame. 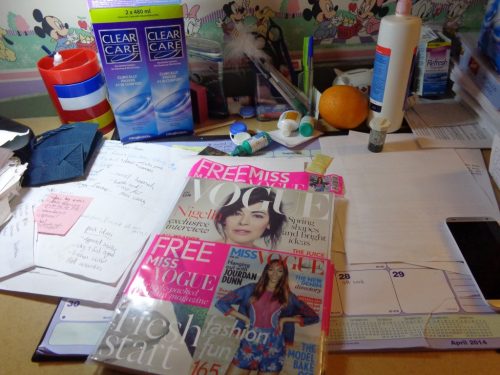 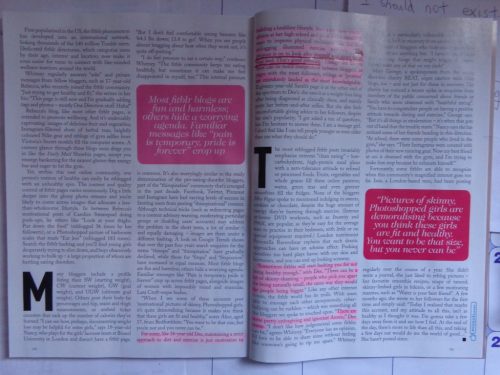 It refer to me as Deirdre because when I first started blogging on Tumblr, I wanted to keep it away from my personal life. So to protect my privacy, I never showed my face, changed my name from Linda to Deirdre, or Dee/D for short(I have always liked the name. It’s pronounced Deer-der and you’re free to call me that for fun if you like!) and took pictures without obvious signs and places so they wouldn’t get too suspicious. You can read more here. Since then,  I’ve moved on from small town blogging and wanted to go more professional, I became more transparent to you guys and revealed my name, age, and face.

Back then, when fitblrs were just becoming the new thing on Tumblr, Lisa interviewed a bunch of Fitblrs and somehow stumbled on mine and emailed me about a potential article on Fitblrs.

It all happened on a small Saturday(was it Saturday? Tuesday? Who knows) evening, when I suddenly got a direct message on Twitter from Rebekah(@renekaba). 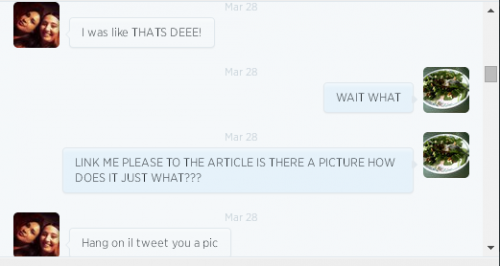 She got a free edition of the April teen vogue magazine and decided to leisurely read it through and found an article on fitblrs. Thank goodness my friend Rebekah told me, otherwise I would have never figured it out. Remember to check out her Twitter! She’s also interested in weight loss and fitness.

Upon reading the article, which frowned fitblrs as being potentially harmful, I noticed they sometimes rephrased and stretched out what I said. For example,  in the article, they stated I was 16 when I said in the interview that I was in between the age of 15-18. They were right at the time. I was 16. But how would they know? Was that a lucky guess? I highlighted everything in the article that had to do with me, and I can tell you for one that I did not say the words, but rather implied, “There are some pretty unforgiving and ignorant Anons,”. 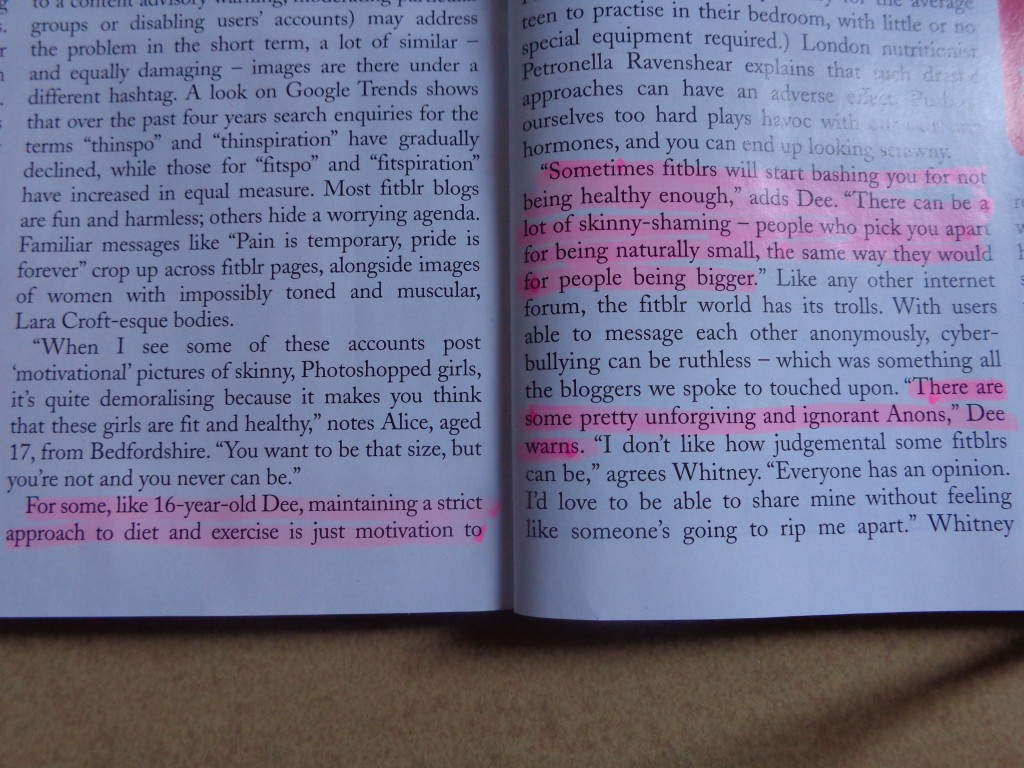 Here is the full interview:

When did you join tumblr, and why?

I joined Tumblr in 2011, to document my journey about fitness and health, and to journal my daily thoughts. I thought it was a good way to hold myself accountable and be supported by the community.

Can you tell me a little about fitblrs – what exactly are they, and why did you start oneyourself?

Fitblrs are short for “Fitness Tumblrs” which blog information, recipes, and motivation. I started one to keep myself motivated and accountable for what I do on this journey!

What’s the fitblr community like? Do you talk to other fitblrs?

The Fitblr community is amazing. There are so many people are on the same path as you are, and seeing them post, you feel like you could relate. I mostly talk to fitblrs who blog about their personal journey rather than reblog a bunch of posts because I look for personality in a blog!

I like that it is a big community with many diverse athletes from all around the world. There is a lot of information roaming around and I learn something new every week–whether that be a new recipe, or exercise science, anything really! One thing I don’t like is the judging. When you do something, you sometimes feel the new to justify or elaborate on it and sometimes, defend yourself. For example, in my opinion, Fasting is healthy. But sometimes people jump to conclusions and start bashing you for not being healthy and for promoting “Self-starvation” when the two are completely different and your intentions only mean the best!

What’s the difference between ‘thinspo’ and ‘fitspo’?

Thinspo is inspirational pictures of thin people and fitspo is inspirational pictures of fit people. The two can be the same when it comes to someone being thin and fit at the same time. In my opinion, thinspo and fitspo are great because they motivate your weight loss/ journey to getting healthy! It all depends on the person though–some say it’s body shaming, and/or it makes them feel crappy about their own bodies, but I see it as a positive thing and pictures never meant to shame anyone, it’s them that’s taking it too seriously.

How much time do you spend on your blog?

I try to post at least 2-3 good quality(a little bit long) posts per week. REcently, I decided to expand my blog and become more professional and official. I check my tumblr for at least 20 minutes per day and days that I make long posts it could take me 1 hour or more per post!

The majority of blogs I follow are personal fitness blogs(people who blog about their own journey). I follow just a few “Fitblr Picture Tumblrs” enough to fill my dash with the 101 on fitness and some motivational pictures.

Amazing, thank you! I will take a look at these too. Also I meant to ask as well, what is an ‘average’ day of the sort of thing you eat/the workouts you like to do? And what are your favourite snacks and exercises?

I don’t have a set routine because, well…I’m in a very unfavorable circumstance where I can’t and have to “secretly exercise”. Don’t get me wrong; I’m perhaps the only fitblr that has to do this because my situation differs greatly from everyone else. I would love nothing more than to exercise for the majority of the day and spend the rest adventuring! My favourite exercises are:
I actually adore dance and cardio. I really, really do. My favourite snacks include:

Thanks D, really appreciate your honesty with all this. I’ve been speaking to a few more bloggers and would love to get your thoughts on a couple more q’s if that’s ok!

Who are your fitblr inspirations? Are there any actors/models/singers etc who you particularly admire or get reblogged lots within the fitblr community?

My inspirations are Cassey Ho and some victoria’s secret models. I don’t really have people in particular–I can’t wait until I become an inspiration to others!

No, not that I know of. Most of the time there are some pretty unforgiving and ignorant Anonymous’s but we’re pretty friendly and respect each other’s decisions and choices.

There seems to be a lot of repostings of perfect food and perfect bodies – do you ever feel any pressure to eat a certain way/look a certain way on tumblr?

Nope, not at all! I like those actually. It reminds me of why I started this journey and what I’m striving to be–the fittest, healthiest, skinniest, happiest, self. I know to some people it makes them angry and feel shitty about themselves, but we don’t all share those same feelings and to many people it’s actually very motivational and beneficial. If any pressure at all–is the pressure to look after yourself and strive to be your best. That’s good pressure.

I’ve seen lots of ‘trigger warning’ sections on tumblrs, can you explain what those are?

Trigger Warnings are usually used by people who are mentally disordered and many say something that triggers someone to feel upset, or offended. For example, someone could blog about cutting themselves and that might be triggering to a former self-harmer.

It seems like a lot of fitblrs are in recovery from EDs – do you think that tumblr is helpful for this or harmful?

It all depends who you’re following. If you’re following body-positive, healthy fitness blogs, then yes, it can help you recover. But following the wrong blogs won’t help. It’s all about you, and what suits you.

Has tumblr affected your relationship with your body image?

Not exactly. There is a fine like between body-positive blogs, and skinny-shaming blogs. There’s been some shaming on thigh gaps. People are bashing others for wanting to obtain a thigh gap because they view it as “unhealthy”. I don’t think it’s A)right to bash people and B) Just because you want a thigh gap does not make the right for someone to diagnose you with an eating disorder or low self esteem. It just means that they want one and nothing more. That’s like saying if I just eat all the red smarties first then I must have an OCD. People jump to conclusions too much. 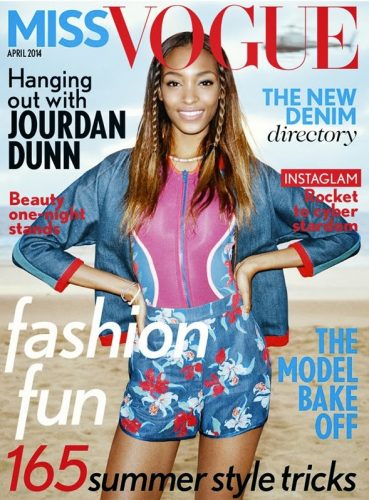 So there’s my taste of “fame”.

Have you ever been mentioned in media? Was there anything about what they did or said that you would have changed?