I woke up at 6:15 from a pretty good dream…I only remember waking up feeling like I could go back to sleep and continue the dream, but instead I manned-up and did 20 minutes of abdominal pilates before packing my lunch and whatnot for school. I used to be a really big breakfast eater, but ever since I researched intermittent fasting I became less of a fan. Now skip it on occasion and today was one of those days. I broke my 16 hour fast at 11:30am with a lunch consumed in less than 30 minutes. I wasn’t hungry and could have gone without lunch too, but I didn’t intend to experiment with anything longer than 16 hour fasts. I gobbled up 900 calories. The Music theatre course that I take only allows its students a short lunch, so when you do eat, it’s got to be snappy!

I’m not as happy at this Art school as I dreamed I would be. I mean, I blogged about wanting to sing, dance and act since forever, but now that I’m finally at the arts school I thought so highly upon, I feel my passion for performance stripped away from all the harshness and workload. I thought I was going to learn how to be a better performer. I thought the teachers would be nice and want to get to know each student individually and train them. But the truth is, at this school, it’s all and only about the productions. You either got it, or you don’t. The only thing I learned is discipline. I realized they don’t care about us individual students at all. And that’s why I am thinking I dropping the course next year. 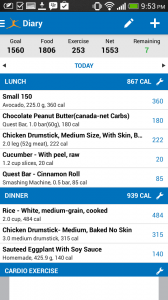 After a long rehearsal, I went to fitness class and ran 20 minutes on the treadmill.

I thought I was going to dread it. I even often called it the Dreadmill! Running in a constant place, the pressure to maintain a steady pace, the harsh lights and the mechanic sounds of a conveyor belt…it’s a love/hate relationship. Surprisingly, I felt good! It was a good challenge to maintain a steady pace. I actually didn’t get bored and I didn’t feel tired after a good 5 minute warmup. I ended up running about 2 miles in 20 minutes. That’s good enough for me!!

Oh but then get this: I went to the weekly beep test club after school. Trust me, at the end of my 20 minute run I did not want to stop, but 10 minutes into resting the effects started settling in. Blisters started appearing on my feet, making it uncomfortable to walk. My energy level dropped.

I usually get to level 7.5 on the beep test. In my head I was aiming for a 5 that day. No, level 5 was generous. I was aiming for 4. Heck, I wouldn’t be too pissed off if I dropped out at level 2. My coach shook his head.

He then want on and said he expected a level 6. My first reaction was, “NOOOO!!” What I wanted to say was, “Look, my feet hurt I can’t run, I had track practice yesterday—even though it was short—and today I had a 20 minute run, I mean if I didn’t stop I would still be feeling okay but I stopped and now all I want to do is throw myself on the couch with hot soup!”

I made it to level 7! What! Whoo! And the thing is I didn’t really feel like death, I just felt tired but like I still could run. Kinda like a car that’s gone through a hurricane and probably doesn’t look so hot but still had some nice fuel? Yeah that’s how I felt! Wait— Could this be a…”glimpse” of what ketosis must feel like? With no glucose in my muscles, my body digs in to an abundant energy supply of body fat. (And oh, I say “glimpse” because I haven’t fully adapted a Ketogenic diet yet, so I’m not currently in ketosis. Anyway, Wednesday was a really good day for me)